46th President of the USA

Like many I watched the inauguration of the 46th US President Joseph R Biden Jnr along with billions of others around the world.  An iconic moment not only for Joe Biden but for the first female US Vice President Kamala Harris.

Both of these people have made history for many reasons.  For one Joe Biden replaced President Trump who was visibly not missed from the gathering which included past Presidents Obama, Bush and Clinton. Kamala is not only the first female Vice President but the first Black Asian Vice President too. 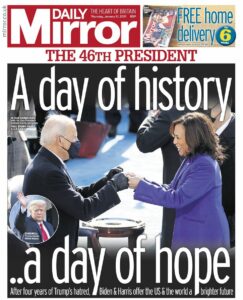 I’m British and living in the UK but I have spent a great deal of time in the USA both for work and pleasure.  And as anyone who does similar will know you find yourself watching a lot of news.  Plus I hove American history – it may be only 413 years old but I find it genuinely fascinating.  I’ve travelled to 26 states in the continental USA and take a great interest in each place I visit. I have family and friends spread across the US and I hold it dear to my heart.

That said I have felt so sad by the recent crises which have affected so many over the past year.  And I believe Joe Biden and Kamala Harris will rectify much of what went wrong over the past four years.  Undoubtedly there will be clashes as Kamala appears to be much more left wing than Joe but with his long experience and her modern and diverse approach to what is needed to Make America Great Again, they look like they will do a cracking job!

But aside from the mega cloud Trump attempted to leave in his wake, the inauguration was a success. Despite the lack of a crowd due to security concerns in the wake of the storming of the Capitol, the ongoing Pandemic, wind and snow, the sunshine came out.

The amount of money spent on elections in the USA is really quite eyewatering. Thankfully we have such a different way of going about a general election.  And we don’t spend huge sums of money trying to get to be prime Minister.

There are limits to how much a political party can spend on their campaign in the UK.  This limit stands currently at £19.5 million. However in the USA in 2020, the overall spending limit for publicly funded presidential candidates in the primary elections was $51,850,800. The spending limit for 2020 for the publicly funded general election presidential candidates was $103,701,600.  And, unbelievably if the candidate wishes to contribute with their own funds, whilst they must  report the mounts, they are not restricted on how much they put in.

We have a huge variety of speakers who cover topics such as international affairs, politics, relations ad economies as well as trade and industry, finance and environmental issues.

Please email sylvia@thespeakersagency.com for recommendations, availability and fee information at anytime and I will be only too happy to help.