The team at the Speakers Agency are all huge fans of the Best Exotic Marigold Hotel and its posse of some of the greatest British actors alive today.  The team feel it was a genuinely great film covering a subject which not many TV shows nor films had touched in any great detail.  Indeed they were loathe too.  And quite rightly it struck a cord with so many people. Bit like Colonel Tom Moore whose 100th birthday it is today.

That said I for one, was unsure or how successful The Real Marigold Hotel TV series would be when it hit our screens.   What better than to watch a collection of nice and not so nice celebs try out the retirement options in India for real.

In previous series Bobbie George and Sheila Ferguson stick in my mind for being such good eggs and I have always loved the  indomitable Miriam Margoyles in a later series along with Rosemary Schrager.  The actress Amanda Barrie was great fun. Wayne Sleep pirouetted his way about and Sid Little made us laugh and cry. 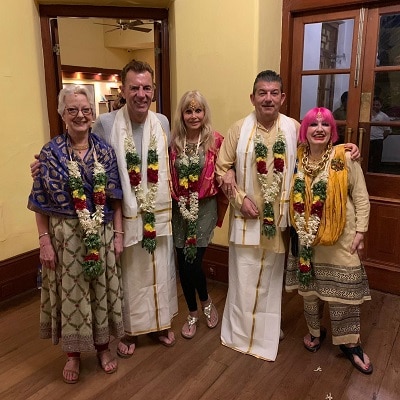 So it was with much excitement when we heard a couple of our great speakers are in this year’s line-up.

I have known former Eastenders star John Altman for many years and as well as being a kind and true gent, he is a really talented speaker and event host.

Albert Square’s most reviled character. Playing Nick Cotton has been a double-edged sword for John.

I remember walking with John when someone has shouted at him in the street, “it’s a disgrace the way you treat your mother!” The former Dragon’s Den investor Duncan Bannatyne is also appearing in this year’s series.

What a cracking lineup.

John Altman is available for speaking about his life and the lessons he has learned along what have been at times a very rocky road. He is also an impressive event host.

As most of you will know the travel documentary series was inspired and named after The Best Exotic Marigold Hotel, and follows elderly celebrities as they test out retirement in India.

This year’s viewers will see the group explore the colourful culture of the cities of Puducherry and Rishikesh. And as always, the viewer gets an often emotive insight into the trials and tribulations of their careers and personal lives.

I’m sure viewers feel the same way as I do in that you see unlikely friendships occur along with the odd car crash of colliding characters.

We enjoy the laughs and the tears, and this series looks like it will supply them both in equal measure.