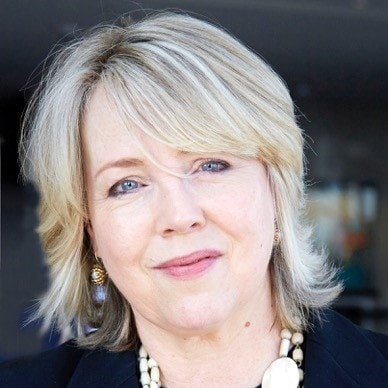 Speaker Jo Fairley, the hugely successful entrepreneur who co-founded Green and Blacks Chocolate has been on Desert Island Discs. It is well worth a listen.

A huge fan of Desert Island Discs, she was standing in her kitchen listening to an episode on catch-up. That week the castaway happened to be someone she knew but found them a tad boring.  A bit fed up Jo shouted loudly at the radio: ‘When are you going to ask me???!’

So you can imagine her shock when just four days later an e-mail landed in her inbox titled: ‘Desert Island Discs’. Even more so when she realised they were asking her to be on the programme.  She says she wondered if her radio had somehow been listening to her every word and communicating directly with the BBC.

The most exciting thing ever

Most certainly she wrote, it was quite simply, one of the most exciting things ever to have happened to her.   An amazing honour.  She heralds it as something which has made the huge amount of hard work, she’s put into her businesses worth the effort.  She learned shortly after the show aired that it is the most listened-to radio programme in the world.

Unsuprisingly the response was huge. She’s reconnected with some long-lost friends. What’s more she has had  five missives from fellow pupils of the school she went to contact her.  They all told her they had experienced equally scathing put-downs from the same Scripture teacher. The one who told Jo she’d never amount to anything. The teachers’s exact words were. ‘Jo Fairley, if you ever make so much as a Girl Friday, I’ll eat my hat.’ How wrong was that teacher!

Jo says the recording experience itself – fueled by squares of Green & Black’s and tea served in a Desert Island Discs mug – was beyond fun.

Talking of fun Jo is a tremendous speaker who captivates her audiences with her incredible story – please call us on +44 (0) 1332 810481 or email holly@thespeakersagency.com for Jo’s fee and availability.

Green & Black’s, the Beauty Bible website, her bakery and wellbeing centre and The Perfume Society